In just twelve days, Chadhiyana: In the Company of Shadows issue one is scheduled to release through Rosarium Publishing (and again, pray there are no delays). It will be a fresh chance for new readers to be brought to the series and a chance for some of Chadhiyana’s older fans to relive the story as it began unfolding for over a year here on chadhiyana.com. With that and a series of three conventions in a row coming up toward the end of this month, I’ve been hard at work on preparing issues two and three and creating new artwork for my standing banner for conventions appearances–and Chadhiyana (of course) is included on the piece.

If you follow me on social media, you would have seen small portions of the banner art as it came together over the past week. As it is, I’m not going to give a full description of the piece, as you can read that on my main site, jmdesantis.com (where I blog weekly–you can read a full description and write up about the banner at jmdesantis.com/2015/07/new-banner-art-revealed/). However, I will say it is one of my favourite pieces to date, especially as far as depictions of Chadhiyana go. So, if you haven’t already noticed, I’ve changed to top banner for this site to include the Chadhiyana-related artwork from the new piece.

If you are attending any conventions in which I am appearing, just look for this artwork. It will be right behind me for, hopefully, the next couple of years at shows. If you’re not sure what conventions I’ll be appearing at, you can always get an up-to-date list on the Events & Shows page of jmdesantis.com (conveniently added to the sidebar here on chadhiyana.com: jmdesantis.com/events/).

Hopefully I’ll see some of you this summer in New Jersey, Boston or Long Island. And even more so, I’m hoping you’re all as excited for the release of issue one as I am. It’s not that far away. Let the countdown begin! 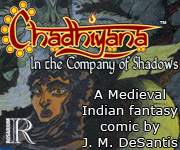 Back to Top | No Comments
Tags: Chadhiyana, jmdesantis.com
Cancel Reply