The New Year has only just begun, and already there are some big things on the horizon. Within just a short period of time, the long-awaited third issue of Chadhiyana is going to be released, and I’ll be making an appearance at another comic book event. So get your calendars out. It’s time to start marking down a few important dates.

For myself I’m excited because it’ll be a chance to meet some of the other Rosarians in person. More, I hardly ever attend a convention or event in the winter months. It’s also been a long time since I’ve been at a publisher’s table, rather than having a table of my own, so it’ll be nice to kick back a bit and not have all of the pressure and focus on me. 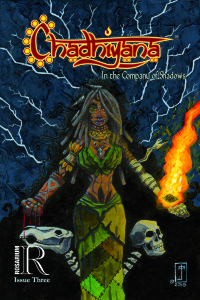 As for Chadhiyana, issue 3 is scheduled to release a month from now on February 15, 2016. Again, I know there’s been a bit of a wait in between the first three issues, but I’m hoping things will move a little more smoothly from here on out. I’ve been given a schedule by my publisher, and we’ve committed to putting out the first trade late this year or early next year, so other than unforeseen setbacks, the remaining issues in the In the Company of Shadows story arc should come out more consistently.

That said, I should point out that my newsletter subscribers were given the release date a few weeks early when I sent out my December issue (though then the release date was listed as February 2nd). So, it’s just one more reason to join the list: sometimes you’ll have information before it even goes out to my social media followers or on my blog (if the timing is right).

And that’s about all for this week. I’m glad to be hitting the ground running this year, as usually January and sometimes February are slow months for me. 2015 was amazing, but as I said in my reflection post last year, it was merely laying the groundwork for this and future years.