The folks over at Rosarium Publishing have tentatively set the digital release date for the first issue of Chadhiyana: In the Company of Shadows for July 13, 2015. The announcement was made last week over social media. Now, with the date set and anticipation building for the first issue, Rosarium Publishing is seeking out reviewers for issue one. It’s an exciting thing to be able to announce that the first of those reviews is in and it is a positive one.

Though the graphic novel published weekly on this website for over a year before Rosarium Publishing picked it up, there had never been an official review written about the then web-comic. The growing readership and some industry professionals had good things to say about it, but there was nothing on the internet to entice new readers to the book. It’s a proud day for this creator to see such a warm reception to his work. Hopefully there are many more to come.

Below is a link to the review. Some of Chadhiyana’s original readers will remember the content for issue one as the Prologue and about half of Chapter I (when it was featured on this site)–though much editing has been done to the text and lettering from its original publication. If you’re new to Chadhiyana, hopefully this review will gain your interest enough to check out the first issue when it’s released in July. Though, if this review and the confidence of this creator means anything, issue one won’t be the last issue you pick up either. 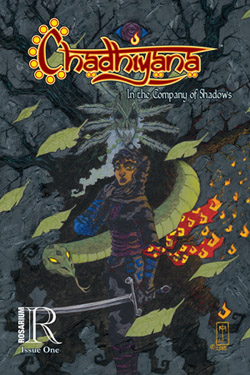 Back to Top | No Comments
Tags: Chadhiyana, Chadhiyana: In the Company of Shadows, Rosarium Publishing
Cancel Reply