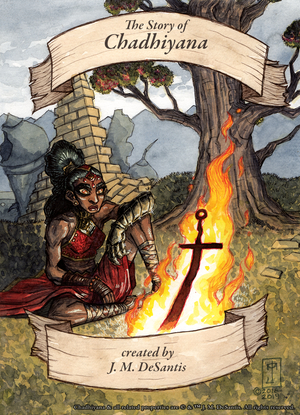 Scarred by her past, Chadhiyana is a strong and beautiful woman with a fiery temper and a fanatical sense of justice. Traversing a dark fantasy world inspired by the cultures of South Asia, the Middle East, and North Africa, Chadhiyana, sword in hand, fights even to defend the weak and innocent. Only beneath her hard exterior lies a vulnerability and a past from which she is trying to run.

The Chadhiyana comic series tells the story of this formidable yet controversial heroine against a dark fantasy setting inspired by the cultures of South Asia, the Middle East, and North Africa.

THE STORY OF CHADHIYANA

Chadhiyana began as a piece of artwork by J. M. DeSantis called “Goddess of Sand”. When he placed the image on his convention banner, it garnered the interest of some con goers and he decided to explore the story of this then nameless character. 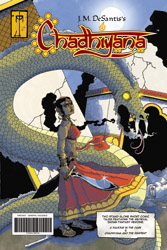 By 2012 Chadhiyana appeared in two short comic stories (A Saviour in the Dark and Chadhiyana and the Serpent) in GWP Presents, which were later collected in Chadhiyana #0. J. M. DeSantis then moved onto Chadhiyana’s origin story in Chadhiyana: In the Company of Shadows. It began as a web-comic on chadhiyana.com in 2013. In 2014 it was picked up by Rosarium Publishing who published five issues of Chadhiyana between 2014 and 2016. It was then, after Chadhiyana #5 that DeSantis decided to step away from the project temporarily and reassess the property and its future.

In 2019 it was announced that a new Chadhiyana series would begin publishing under Dark Fire Press (darkfirepress.com). Five new issues are scheduled to publish in 2020, with nine new standalone stories. The announcement began with the short comic, The Call of Fire, and will be followed with the first issue, Chadhiyana: Re-Kindled in early 2020. 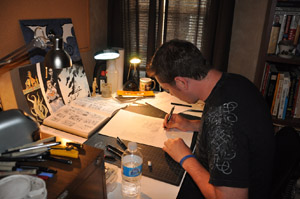 J. M. DeSantis is a writer and artist (Write-ist) and the creator of Chadhiyana. To date he has written fourteen Chadhiyana stories (including the yet-to-be-published new series from Dark Fire Press), with six current issues, and more to come. Other than the Girl with the Fire-Ringed Eyes, DeSantis has worked on a number of publications and with a number of studios, both as a writer and an artist. He is also the author of the horror novella, Robert Phillips, a children’s book about acceptance named Ghosts Are People Too, and the short comic The Tainted Ones.

You can learn more about the creator and browse his other works on his website, jmdesantis.com.

The wonderful and distinct Chadhiyana logo was designed by artist and graphic designer, Corey Breen. It was loosely inspired by Devanagari script, and has the colours of Chadhiyana’s own costume.

Originally designed in 2013, the logo was slightly adjusted in 2019 for the announcement of the new series. The adjustments were also done by Corey Breen.

See more of Breen’s other work on cjbpro.com.